Let’s talk about money. Cold hard cash. Empires have been won and lost on the funds fuelling their campaigns. Extreme actions are taken for the lust of a luxury lifestyle; all for extra zero’s in a bank balance. Coins turned to paper, notes emblazoned with the cultural symbols of the society in which they are exchanged. Handled every day, they are ubiquitous yet potent vessels of status.

A pause took place following this immediate success. Over a year in the making, the newest series of portrait works to arrive at the Wyecliffe studios in Weybridge have been anticipated by team and viewer alike. Developing concepts in her mind and transportable mood boards, Alexander admits that it takes months of preparation before she can act on her ideas by placing paintbrush to canvas.

Money and art have a fractious and often headline grabbing relationship. Auction houses aim toward record breaking sales to validate their services and profile, simultaneously wowing an eager cult impressed by excess. Currency therefore is both the result of an artistic acquisition and for some artists inspiration itself.

Andy Warhol appropriated the readymade dollar sign and cast it in large silkscreens advertising wealth and the American dream. Declaring “Money is the MOMENT to me. Money is my MOOD”, the pioneer of pop art pronounced an enduring outlook which has creatively shapeshifted through the decades that followed.

Having found prominence for his dedication to the craft of urban stencil work which has true purpose, Lhouette is a refreshing authentic voice amongst an ocean of shallow imitations. His slick combinations of well-chosen icons sit amongst neoclassical motifs and accomplished portraiture of legendary stars.

For a geographically tiny territory (far smaller than greater London) Hong Kong has risen to be a major economic power and world financial hub – its city accommodating the worlds’ largest number of skyscrapers. Hong Kong’s powerful currency, with its proud, majestic lion motif provides the perfect fusion of east and west; tradition and commerce. The cartoon characters in their bold, clean primary colours contrast sharply with the tactile, textured, almost rough-hewn organic properties of the underlying ‘Hong Kong Dollar’.

"What we really want to do is what we are really meant to do. When we do what we are meant to do, money comes to us, doors open for us, we feel useful, and the work we do feels like play to us." 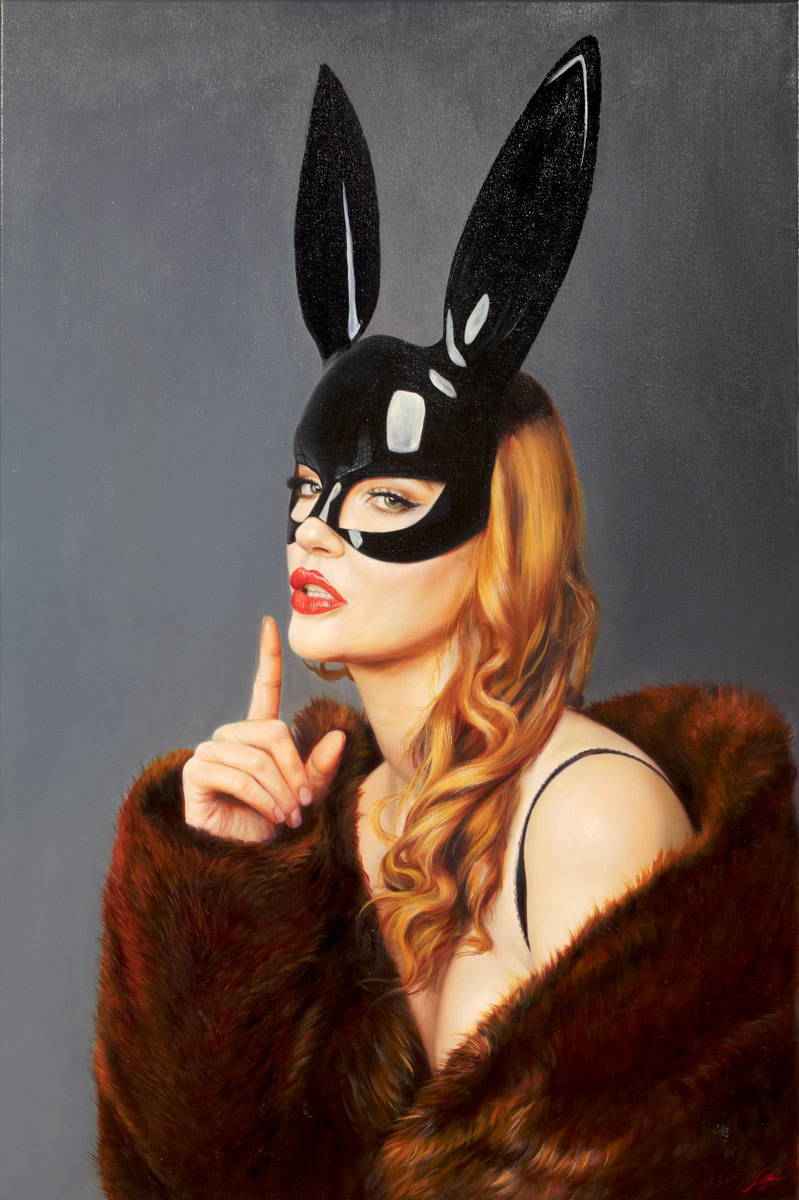 The muse chosen, selected from thousands of faces was Scandinavian model Sylvia Flote. A keen friendship between the two women developed as the paintings progressed, contributing to the intensity and richness of the portraits. Flote’s aura of feminine playfulness and poetic nature helped to direct the works, with the artist constantly re-working to find new depth and meaning in the finished oil paintings. Alexander admits her model’s pale skin and richly coloured hair were challenging to paint as were the extravagant fabrics she was clothed in, though she was kept captivated and committed by the fire she found in the eyes of her new friend.
Each portrait is titled only to reveal a little behind this intense work process, leaving the reading open to the imagination of the viewer. Alexander is keen for her audience to connect with the sitter, without the interference of concept and rhetoric. Dance with Me, Hear Me Whisper, and Serenade are all life size works, impressive statement pieces.   Of note is the striking red guitar in Serenade which is the artist’s own – a new passion is learning to play the instrument to focus the mind.
Future plans include expanding her collection of muses to become a painter come anthropologist, to depict women of all skin colours, reflecting the diversity of the global culture. A movement in society geared towards the equality of both genders, Alexander is at the forefront of an artistic and political zeitgeist championing women and the ownership of their own images. An artist on the rise, she represents an incredible fusion of traditional painterly talent alongside a contemporary vision.