Kerry's inspiration for 'The Daughter of Gaia' 'Daughter of Gaia' - Archetype of the Greek Goddess of the Earth 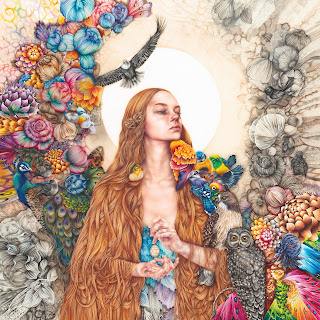 'Daughter of Gaia' was inspired by several things. Easter Island, a painting and mythology.
Archetype Of the Greek Goddess of the Earth
Easter Island is the most beautiful place I have ever 'felt'. The energies there are incredible. It is silent yet full of ancient noise, stained thick full of memories and stories. It is a 6 hour flight straight into the Pacific Ocean, in the middle of nowhere. 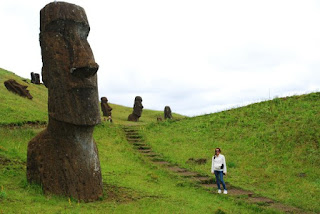 Legends there tell of the Birdman ritual, and it was a story about this that conjured the image of a girl surrounded by birds. I wanted to drape her hair over her arms, to subtly represent intricate wings.

The painting
I love Victorian, Nouveau and Pre-Raphaelite paintings and was particularly inspired by this piece by Cadogan Cowper when I was deciding upon the composition. 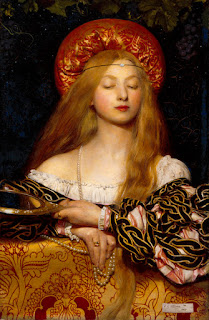 I also love the way Mucha often uses circular shapes behind his figures, representing the sun or the moon. 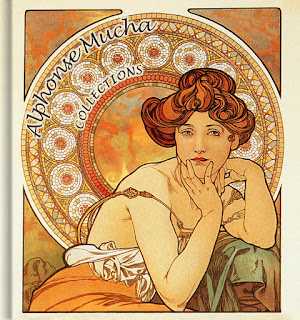 The first Greek god was actually a goddess. She is Gaia, or Mother Earth, who created herself out of primordial chaos. From her fertile womb all life sprang, and unto Mother Earth all living things must return after their allotted span of life is over.
Gaia or Gaea, known as Earth or Mother Earth (the Greek common noun for "land" is ge or ga). It is written that Gaia was born from Chaos, the great void of emptiness within the universe.
Nowadays, some scientists use the term "Gaia" to mean the complete living planet itself, as a complex organism.
Gaia, as Mother Nature, personifies the entire ecosystem of Planet Earth. Mother Nature is always working to achieve and maintain harmony, wholeness and balance within the environment. Mother Nature heals, nurtures and supports all life on this planet, and ultimately all life and health depend on Her. In time, Nature heals all ills.
The way of Mother Gaia is the gentle, feminine, Yin way of healing. The Mother Nature is a healing goddess.
'In the 1960s, James Lovelock formulated the Gaia hypothesis. It states that all life, and all living things on this planet, are part of a single, all-encompassing global entity or consciousness which he named Gaia. It is this global consciousness, Mother Gaia, that makes our planet capable of supporting life.
Through the global consciousness of Mother Gaia, all living things on this planet, from their most primordial instincts, are constantly interacting with their environment to ensure the harmony, balance and continuity of Life. Live in abalance with Mother Nature and health and healing are yours; violate Her laws and get out of balance, and you pay the price in suffering and disease. In this sense, all medicine and healing can be seen as a system of ecology'.
(www.greekmedicine.net/mythology)
Gaia had prophetic powers and was closely associated with a number of oracles. She was worshipped as a fertility goddess at shrines in many parts of Greece.
Incidentally, she gifted HERA with Golden Apples of Immortality as a wedding present.
The Egg of Life
Sacred Geometry is older than we can ever know. I have read a lot about The Flower of Life and the Egg of Life is found within this symbol. 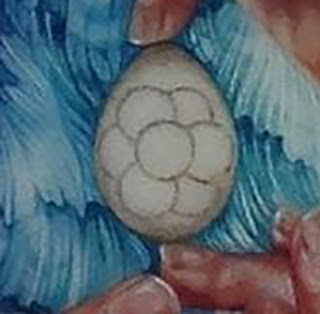 I decided to name her 'Daughter of Gaia' rather than 'Gaia' because I don't believe that I could put a face to Mother Earth, I feel as though she is more of a force that is everything and everywhere.
View the Unique Edition here
Share: