For an artist such as Kerry Darlington - profoundly inspired by the Mythology of Wales - the dragon is a towering figure in legend and folklore. A creation-myth, a natural deity and a powerful symbol of independence as noble and fiery as its appearance.

This is why we are very excited to present the first preview images of two very special new Unique Editions... Meet The Dragon of the Underworld and The Dragon of Hidden Treasures. 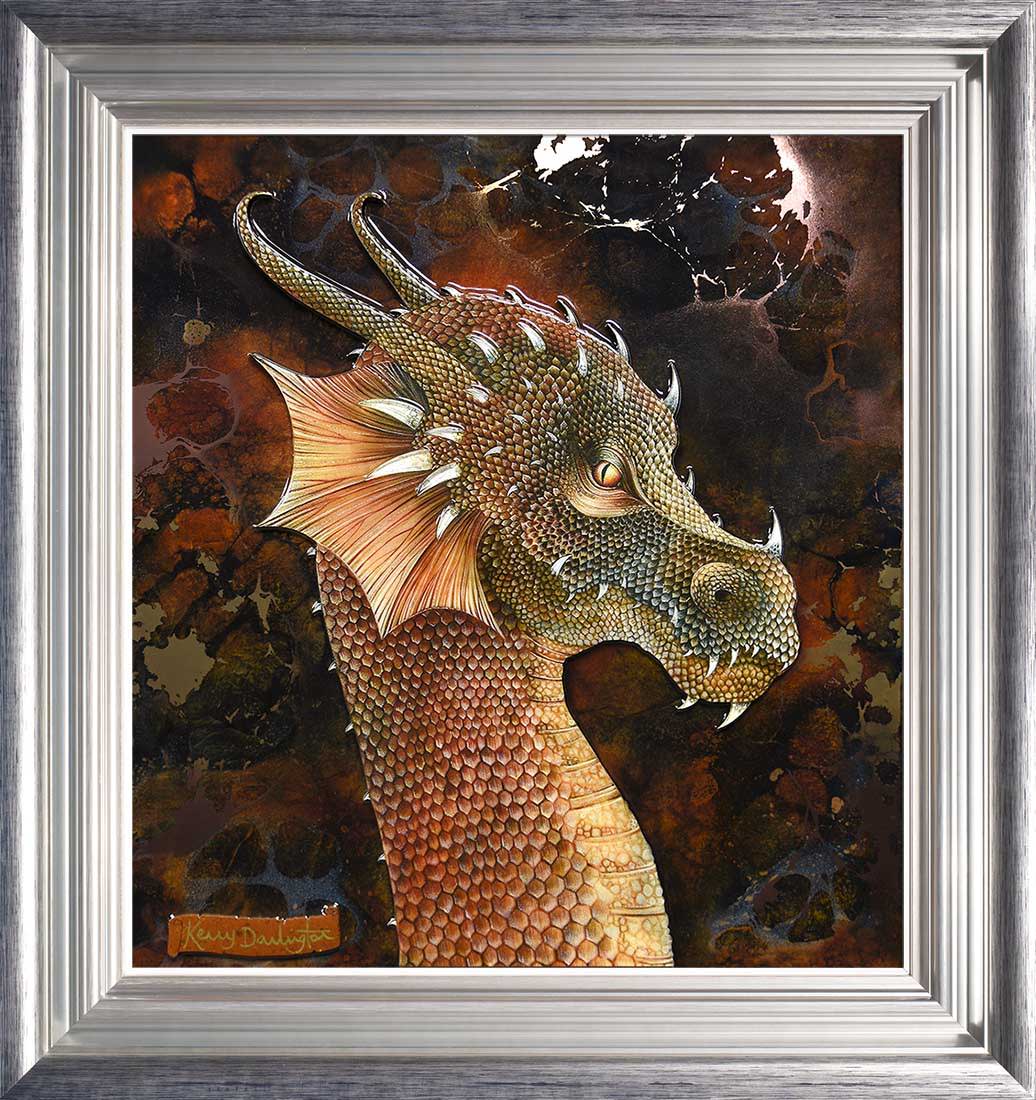 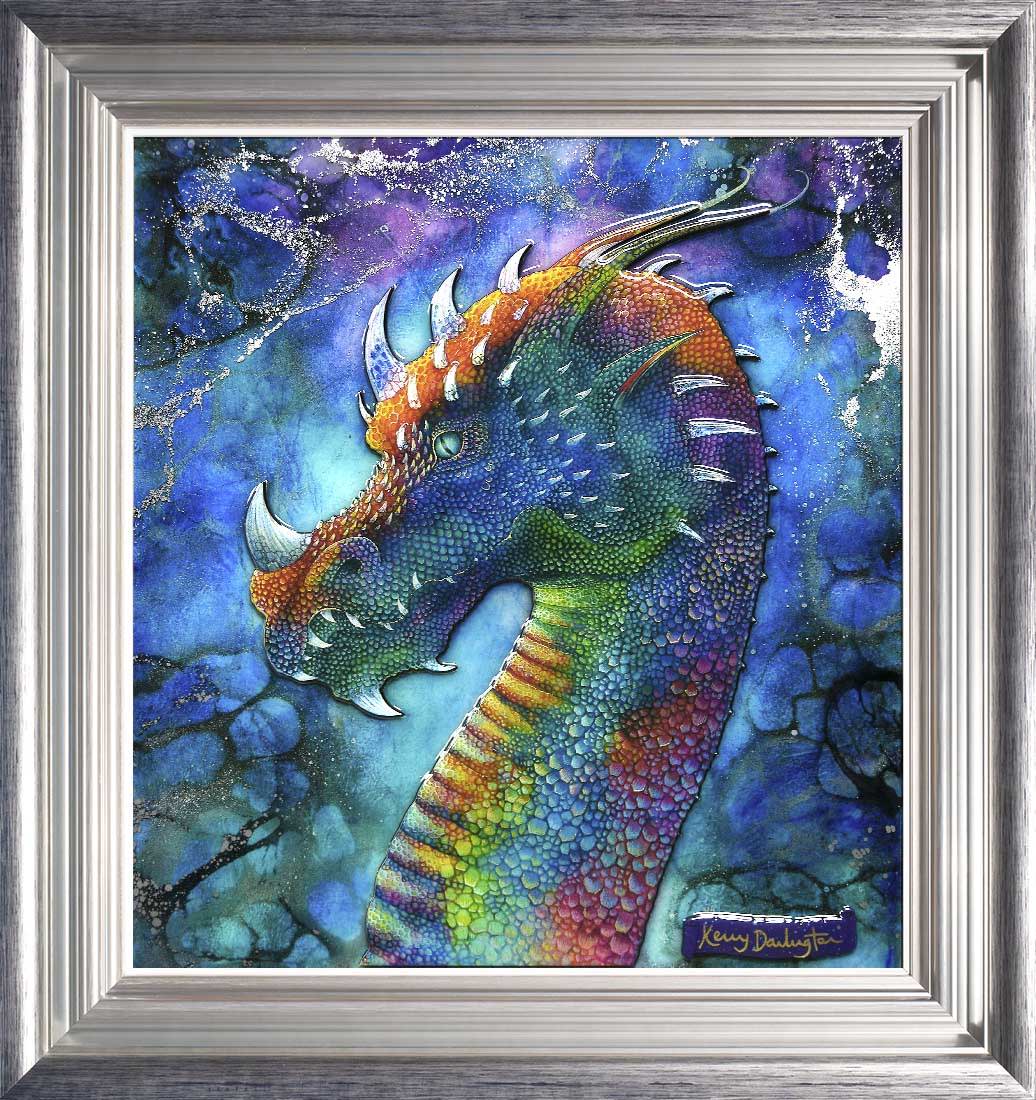 Perhaps because of its rarefied status, the dragon has been absent from much of Kerry's work over the last decade. Even her mythic, Celtic inspired works hard focused on the more intimate, otherworldly spirituality of ancient trees and the faerie folk. It was only last year, with the fittingly epic release of The Worlds Collide that the awesome power of dragons literally erupted into Kerry's ouvre - and what an entrance they made! Amidst the faeries, witches, wizards and urban fantasy of this work and its incredible following-up Flight of the Dragons; dragons were central to the awe-inspiring battles depicted.

Now, with the imminent release of the first two dragon portraits in her new Worlds Collide Dragon Series; Kerry Darlington brings these sublime creatures to the forefront.

I did paint dragons often in primary school actually! My favourite Illustrators painted dragons and they also appear in other fantasy series' that I have loved; such as Tolkien's works and Eragon by Christopher Paolini.”

The latest Unique Editions in the 'Worlds Collide' series are the first in a collection of famous Wyrms, Wyverns and Drakes from around the world...

Dragons run through many of the world's cultures, with early depictions on the Ishtar Gate of the city of Babylon, 600BC and the Hebrew sea-monster Leviathan.

In China, Dragons are godlike beings: wise and benevolent with powers including weather control and life-creation.

The archetypal western dragon was distilled from many early myths into the dragon in the Anglo-Saxon epic poem Beowulf:presenting the 'classic' winged fire-breathing serpent popular in culture today - from Smaug to Drogon...

The Dragon of Hidden Treasures

Named Fuzanglong, he is the Chinese dragon of hidden treasures. An underworld dragon who guards buried treasure, both natural and man-made. Volcanoes are said to form when this dragon bursts out of the ground to report to heaven.

The Dragon of the Underworld

Named Kur, he is an underworld deity, living in the empty space between the primal sea and the earth's crust and can be heard roaring during earthquakes.

In the mythic history of Kerry's native Wales; the Celtic King Vortigern, upon encountering the hill of Dinas Emrys, pronounced it the place he would build his castle. Among the King's entourage; the young boy Merlin, already gifted with second-sight, warned Vortigern of vast supernatural powers at work in the earth... Sure enough; when the castle foundations were dug, two dragons erupted from a subterranean cavern - one white, the other red.

Fiercely the serpents fought until the red dragon prevailed: becoming Vortigern’s sigil. In the Arthurian legends the icon became a powerful symbol of resistance to Roman occupation, then ultimately the banner of Wales itself - Y Ddraig Goch.

With a rich history to draw from; Kerry Darlington's new series has all the hallmarks of a legendary collection - pre order The Dragon of the Underworld and The Dragon of Hidden Treasures to reserve your edition number and choice of Darlington signature frame before the official launch on Friday July 19th,

Once these conditions are met: the works are painstakingly recorded in our state-of-the-art database system (including advanced location tracking) and extensively photographed by Lucy and the image processing team. With extensive ‘macro’ detail shots utilising the Canon EOS 5DS camera: these shots not only form the basis for internet and print promotions: but form a visual record of the work at ultra-high resolution.

Finally; the works that aren’t immediately selected for the gallery walls (or better still, immediately dispatched to a lucky collector) are archived in our temperature controlled ‘vault’. Stored upright, fully surrounded in custom high-impact expanded rubber: the securely stored paintings are routinely checked and rotated onto gallery displays to ensure they remain in mint condition.